November 26, 2008
If you haven’t noticed it, then either you are hard of hearing or you are one of them. I am referring to those in Hong Kong who say “may I help’choo?” 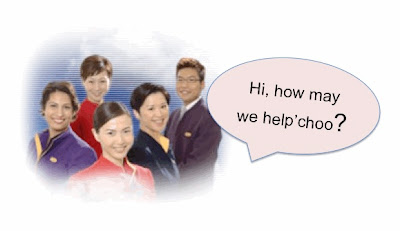 Over the centuries, many have attempted to butcher the English language but no attempt is as offensive or nearly as successful as this one. Uptight Englishmen are known to cringe whenever they hear Singaporeans speak Singlish, injecting their local flavors into the language of Chaucer and Shakespeare. Bizarre as the hybrid language may sound, Singlish is by and large just an accent, and so long as everyone still respects the basic rules of grammar and phonics, accents are simply a matter of taste. Who is to say, for instance, that the Australian accent is any less pleasant than the Jamaican? The problem with saying “may I help’choo,” on the other hand, goes far beyond taste. It is just plain wrong.

Another reason I take such offense with the mispronounced phrase is that those who say it are often people who think they speak very good English. From the concierge at the Four Seasons to the senior bank manager at HSBC, these presumably Western-educated, self-assured professionals repeat the phrase day-in and day-out with complete nonchalance, as if it were the most natural thing in the world. It makes me wonder: is that what they teach our kids at school these days? How did this grotesque phenomenon get started and why hasn’t anyone done something about it? No wonder so many parents here send their kids to international schools these days.

Worse still, there are disturbing signs that the disease has gone from a domestic outbreak to an all-out pandemic across Asia. In my recent trips to Bangkok, Taipei, Shanghai and even Singapore, I noticed that some of the men and women in the service industry were starting to make the same mistake. Many countries in the region look to wealthier and worldlier Hong Kong for best practices in business management. What these countries need to realize is that Hong Kong may be a lot of things, but English teacher it is not.

At the risk of pointing out the obvious, I will go over a basic rule of pronunciation for those who don’t already know it. The only time a “y” sound becomes a “ch” sound is when the word preceding it ends with a “t” or its phonetic equivalent, such as the past tense of a verb ending with a “k” (like “kicked”) or a “p” (like “helped”). In other words, while it is correct to say “nice to meet’choo” and “I helped’choo yesterday,” it is completely, utterly and hopelessly wrong to say “may I help’choo.”

So there you have it. I hope you will join me on my one-man crusade to stop the madness.

“As I See It” has moved to www.jasonyng.com/as-i-see-it

November 25, 2018
As I See It has a new look and a new home!!
Please bookmark www.jasonyng.com/as-i-see-it for the latest articles and a better reading experience.

Legacy articles will continue to be available on this page. Thank you for your support since 2008.

June 29, 2015
There are things about America that boggle the mind: gun violence, healthcare costs and Donald Trump. But once in a while – not often, just once in a while – the country gets something so right and displays such courage that it reminds the rest of the world what an amazing place it truly is. What happened three days ago at the nation’s capital is shaping up to be one of those instances.

Last Friday, the Supreme Court of the United States handed down a 5-to-4 decision on same-sex marriage, the most important gay rights ruling in the country’s history. In Obergefell v. Hodges, Justice Kennedy wrote, “It would misunderstand [gay and lesbian couples] to say that they disrespect the idea of marriage. Their plea is that they do respect it, respect it so deeply that they seek to find fulfillment for themselves… They ask for equal dignity in the eyes of the law. The Constitution grants them that right.”
With those simple words, Justice Kennedy made marriage equality a constitutionally prote…
Read more

July 17, 2014
You have reached a midlife plateau. You have everything you thought you wanted: a happy family, a well-located apartment and a cushy management job. The only thing missing from that bourgeois utopia is a bit of oomph, a bit of recognition that you have played by the rules and done all right. A Porsche 911? Too clichéd. A rose gold Rolex? Got that last Christmas. An extramarital affair that ends in a costly divorce or a boiled bunny? No thanks. How about a membership at one of the city’s country clubs where accomplished individuals like yourself hang out in plaid pants and flat caps? Sounds great, but you’d better get in line.

Clubs are an age-old concept that traces back to the Ancient Greeks and Romans. The introduction of coffee beans to England in the mid-17th Century spurred the proliferation of coffeehouses for like-minded gentlemen to trade gossip about the monarchy over a hot beverage. In the centuries since, these semi-secret hideouts evolved into main street establishments t…
Read more

February 08, 2018
Known around the world as a foodie’s paradise, Hong Kong has a bounty of restaurants to satisfy every craving. Whether you are hungry for a lobster roll, Tandoori chicken or Spanish tapas, the Fragrant Harbour is certain to spoil you for choice.
The numbers are staggering. Openrice, the city’s leading food directory, has more than 25,000 listings—that’s one eatery for every 300 people and one of the highest restaurants-per-capita in the world. The number of Michelin-starred restaurants reached a high of 64 in 2015, a remarkable feat for a city that’s only a little over half the size of London. Amber and Otto e Mezzo occupied two of the five top spots in Asia according to The World’s Best Restaurants, serving up exquisite French and Italian fares that tantalise even the pickiest of taste buds.

While world class international cuisine is there for the taking, it is the local food scene in Hong Kong that steals the hearts of residents and visitors alike. Whatever your budget and palate…
Read more

The Art of Profanity 粗口藝術

November 18, 2013
We react to life’s little vicissitudes – nicking the car door, dropping the phone on a concrete pavement or losing hours of work to a computer crash – with a curse word or two. If some brute walks by and knocks the coffee right out of our hand, the appropriate response is: What the fuck?

Swearing is one of those things that we do everyday and nearly everywhere. But like breaking wind and picking our nose, profanity is only bad when someone else does it. Most of us are too squeamish or sanctimonious to own up to it. Rarely in the human experience has something so universally shared been so vehemently condemned and denied.

Profanity exists in every culture. Curse words are the first vocabulary we learn in a foreign language and the only one we remember years later. The linguistic phenomenon can be traced as far back as Ancient Egypt and Babylon. Literary giants like William Shakespeare, James Joyce and George Bernard Shaw were known to use obscenity inventively in their works, as did …
Read more

The City that Doesn’t Read 不看書的城市

July 14, 2015
The Hong Kong Book Fair is the city’s biggest literary event, drawing millions of visitors every July. The operative word in the preceding sentence is “visitors,” for many of them aren’t exactly readers. A good number show up to tsau yit lau (湊熱鬧) or literally, to go where the noise is.

In recent years, the week-long event has taken on a theme park atmosphere. It is where bargain hunters fill up empty suitcases with discounted books, where young entrepreneurs wait all night for autographed copies only to resell them on eBay, and where barely legal – and barely dressed – teenage models promote their latest photo albums. And why not? Hong Kongers love a carnival. How many people visit a Chinese New Year flower market to actually buy flowers?

If books are nourishment for the soul, then the soul of our city must have gone on a diet. In Hong Kong, not enough of us read and we don’t read enough. That makes us an “aliterate” people: able to read but not interested in reading. According to a…
Read more

Jason Y. Ng
Hong Kong
Born in Hong Kong, Jason is a globe-trotter who spent his entire adult life in Europe and various cities in the United States and Canada before settling back in his birthplace to rediscover his roots. Jason is a news columnist, a bestselling author, a practicing lawyer and an adjunct law professor. He is the President of PEN Hong Kong and a member of the Progressive Lawyers Group. Jason lives in Hong Kong and can be contacted at info@jasonyng.com. For more, visit www.jasonyng.com.

As I See It is a biweekly column that began in 2008 as a social commentary on Hong Kong's many contradictions and oddities. It also tackles the city's pressing social, political and existential issues. Jason's articles are reproduced in the online edition of the South China Morning Post and are frequently cited by overseas news media.

Umbrellas in Bloom, the first book published in English to chronicle the occupy movement of 2014 and the last instalment of Jason Y. Ng's Hong Kong trilogy, debuts No.1 on Amazon.com in the Hong Kong History category. It is all you need to know about the biggest political upheaval in post-handover Hong Kong: who took part in it, why it happened, how it transpired, and what it did and did not achieve.

No City for Slow Men

Published in 2013, No City for Slow Men examines some of the pressing social, cultural and existential issues facing Hong Kong. It is a treatise on local life that is thought-provoking, touching and immensely entertaining.

Published in 2010, HONG KONG State of Mind is a collection of essays that zeroes in on the city’s idiosyncrasies with deadpan precision. It promises something for everyone: a travel journal for the passing visitor, a user’s manual for the wide-eyed expat, and an open diary for the native Hong Konger looking for moments of reflection.